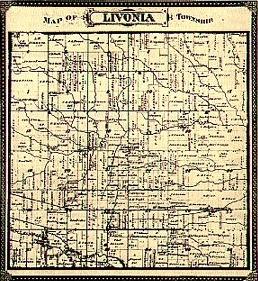 The area that is now Livonia was originally inhabited by Potawatomi Indians. Rich soil and abundant harvests had first attracted pioneers from New England and New York to this area. They brought with them a new way of life and perhaps the very name "Livonia" - the name of a town in New York State, Pennsylvania State, and a region of the Baltic Sea comprising present-day Estonia and Latvia.

By March 17, 1835, when an act of territorial legislature set the boundaries of Livonia Township, a forested wilderness had become an area of prosperous dairy farms and fruit orchards.

For the first 100 years, Livonians raised sheep and dairy cattle and grew vegetables and grain. Growth was slow. But gradually, over the years, dirt trails became roads and ten hard-surfaced highways. In the late 1940s, the area took its first dramatic step from agriculture to commerce and industry. In 1948, the General Motors Corporation built an automatic transmission plant, soon to be followed by a Ford Motor Company parts depot.

In 1949, the Michigan Racing Association built a thoroughbred and harness race track at a cost of 5 million dollars. In order for the entire area of the Township of Livonia to benefit from racetrack revenues, it became necessary to incorporate.

Vote to Become a City

The City of Livonia has held on to much of its heritage through historic preservation, and the acquisition and development of over 1,800 acres of parkland and open space. Greenmead Historical Village is a 103-acre farm/museum of Livonia’s history at the southwest corner of Eight Mile and Newburgh Roads. 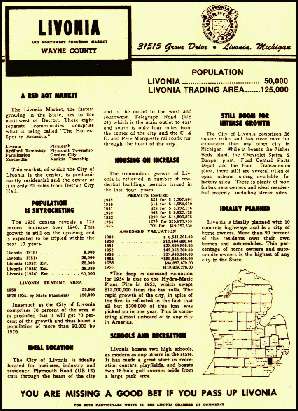